Something to Say: Interview with Lara Shapiro

Stevie Wonder was the first person to buy a Kurzweil Reading Machine. Blind from birth, Wonder marveled when he heard a machine read a book out loud—he tried to buy the demo model. The saleswoman was Bernice Shapiro, writer and director Lara Shapiro’s mother. Shapiro is now in development with a new feature film, TALKING BOOK, about artificial intelligence expert and inventor Ray Kurzweil’s reading machine for the blind. The film is set in 1976, Boston.

Lara Shapiro has written and directed for film and was a staff writer on the FX television series THE AMERICANS. TALKING BOOK was supported as a treatment by a Sloan-Tribeca Filmmaker Fund grant in 2011. She participated with a feature script of TALKING BOOK in IFP’s Film Week in Brooklyn. Science & Film spoke with Lara Shapiro at New York University, where she is teaching a course in television writing.

Science & Film: How did the Sloan Foundation contribute to TALKING BOOK?

Lara Shapiro: When I was a graduate student at Columbia University, Sloan was a presence. I had been given a flyer which said, if you have a project that is about science or technology, apply for a Sloan grant! I remember thinking, that’s a great idea. I thought of my mother’s career, and her experience with the Reading Machine. For years, I thought, I have to write this story–it was because of that flyer. Then, I applied to Sundance with the project, they referred me to Tribeca, and I worked hard on that application and got in. Over the next two years, I wrote the script and it took everything out of me to do it.

S&F: What made the story so difficult to write?

LS: I think the personal component, because I had to change so many things to make it more dramatic, but I had to stay true to the story.

S&F: Did you get any technical advice on writing that part of the story?

LS: Because my mother was so involved in having to explain what the Reading Machine did, she was like my technical advisor. I also got the input of Ray Kurzweil and his business partner Aaron Kleiner.

S&F: What was your mother’s job at Kurzweil Computer Products?

LS: Ultimately she was the head of sales and marketing for the company, but she started out doing research into how users use the Reading Machine to try to figure out how to make it work better. At the time, it was basically a box that had buttons, none of which were marked because the people who were using the machine were blind, so it was not very user-friendly. The original voice the machine spoke in was not digital—this was pre-digital. The voice was very, very difficult to understand, so my mother did a lot of testing about how long it would take for someone to attune their ear to the machine voice. That was a huge impediment when the Machine was first built because it was technically reading but when people would hear it, it just sounded incredibly awkward and unintelligible. The company was wondering, is this something that people could understand? Is this worth getting behind and pursuing? They did discover that people became attuned [to the machine voice], similar to listening to a foreign language that then becomes fluent.

S&F: It can be difficult to write about technology for the screen because technology is not necessarily the sexiest, easiest, or most interesting thing to represent visually. Have you thought about that?

LS: The Machine itself had a clear glass top, so you could see the actual movement of the different parts as it scanned things. So, I often thought of macro shots from inside the machine. Today’s Reading Machine is actually an app in a phone, that’s how far the technology has come. Today’s machine can fit in the palm of your hand and it works. In 1976, when the Reading Machine was first developed, it didn’t always work and nobody could understand it when it did work. It was also huge and you couldn’t take it from place to place—if you did it would probably break down, it would overheat, and so you needed to have an engineer with it at all times. I was obsessed, when writing this script, with trying to translate that to the millennial generation, which doesn’t know a world where there aren’t computers. I am fortunate enough to know that world.

S&F: We have come a long way in such a short period of time—the Internet was only invented 26 years ago. What do you want to show the millennial generation about that pre-Internet time?

LS: I really want to celebrate how far technology has come. Stevie Wonder did a PSA that aired during the Super Bowl, which put the Machine on the map. The way the machine had to be sold to people was through states allocating money in their budgets so the machines could be placed in libraries, because the machines were $50,000 and an average individual couldn’t afford one. After Stevie Wonder was on-air, the sales skyrocketed because it wasn’t just one order, it was ten for this state, and twenty for this state.

S&F: What visual references have you been using for the story?

LS: I have great photos from the time. I have a great image of Ray looking through the Machine when he is 26. 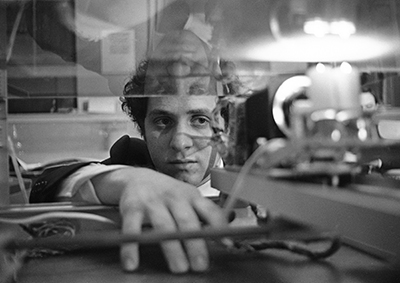 S&F: What about film references?

LS: I remember seeing COMPUTER CHESS, and that was very exciting to see how technology and emotions can come together in an interesting story. A film I looked at a lot was THE SOCIAL NETWORK—trying to put something really big together where you need a lot of people helping you but there is one person leading the charge. I love THE SOCIAL NETWORK, I watched that so many times. Another film I watched a lot was ERIN BROKOVICH for the story of a woman trying to overcome adversity in the face of divorce and bad finances.

S&F: Do you see TALKING BOOK as an individual woman’s story?

LS: It is not a biopic. It is told from the point of view of a recently divorced woman balancing kids with a career. For me, that really resonated as a working mom myself. I put a lot of that into the story. It is about the struggles of somebody working at a time when women didn’t have careers; they might have had jobs, but they didn’t have something they were really passionate about which they were working towards, and for which they were willing to sacrifice their own lives.

S&F: Where are you now with the project?

LS: I went through Film Week with a revised script. I have some financing. I’ve done location scouting in Rhode Island, Boston, Brooklyn, and Yonkers. Yonkers really looks like Boston in ’76. It was very weird walking around Yonkers—I thought, I’m ready to shoot! The next step is to see who is interested. Because TALKING BOOK is a period film, it is hard to do on a very low budget. Our budget is $4 million. I want it to be a story of triumph that has a broader appeal and is not just myopically looking at a group of computer scientists. My next move is to get a producer that is connected to casting to get the whole thing flowing.

S&F: Why has it taken so long to get the script into circulation?

LS: I was working on THE AMERICANS as a staff writer. What happened was, I finished the TALKING BOOK script and then I heard that FX was looking for a writer, and I used the TALKING BOOK script as a sample–and that’s what got me the job. Then, I got completely derailed from making the film because I was working on THE AMERICANS, so the thing that got me the job was the thing that prevented me from continuing. After I did THE AMERICANS I wrote a television pilot, and I just finished that. Then, I happened to get into Film Week. It’s perfect timing, but it’s been two years from when I finished the screenplay until now. When I got the Sloan grant in 2011 I did all this procrastination and then a year went by and I was like, my grant period has ended, I failed, and then I put the pedal to the metal and I wrote it–it was because of the grant, I would never have written the script otherwise. It is proof that you need someone to believe in you. Doron [Weber] said to me, it’s a great story. Don’t diminish your mother’s story. I really took that to heart.

Lara Shapiro is based in Brooklyn, New York. She participated with her script TALKING BOOK in IFP’s Film Week at the Made in NY Media Center by IFP.